This is now the 4th time, i am on my way to King George Island. Traveling to this island is always an adventure for itself and it seems, i am taking a different route each time. This time my way included a train ride to the airport in Frankfurt, Germany, the plane over the Atlantic to Buenos Aires in Argentina. Since working on the glacier impedes trusting your life to the others connected to you through a rope, we have developed a very close working relationship within the Glaciology group as well as a bond of friendship. So the time in Buenos Aires was meant to work together on the data for scientific publications as well as coordinating our work schedules. For a normal campaign, we would be going together as a group. But this time, i travel because the main sensor of the eddy covariance station needed to be disassembled and sent to Campbell Scientific, US, for repairs. The sensor got sent back directly to Punta Arenas and Chile, where i will pick it up to reinstall and prepare everything for the upcoming summer. 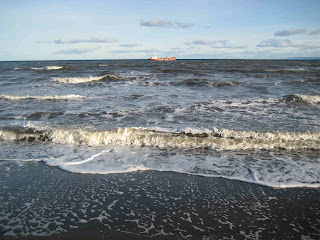 From Buenos Aires, i took the flight to Rio Gallegos, a place that last January we were stranded for about three weeks. So i didn't really want to linger but took the next bus to Punta Arenas in Chile. The road is somewhat uneventful, flat and empty, except for maybe one or two ranch houses, some wildlife in the bushy grasslands, and maybe a few trees torn by the strong Patagonian wind. My last day in Buenos Aires had been sunny and 26 degrees Celsius, my arrival in Punta
Arenas was with snow fall and heavy wind around 0 degrees. Although later it cleared off and i could enjoy an afternoon at the beach with perfect sun but of course very strong winds. I will have to get used to that again, not the sun (you don't see it often on King George Island) but the strong winds that nearly blow you off your feet. 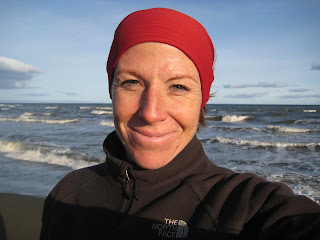 So now, i am waiting for the flight with the Hercules run by the Chilean Military, to bring me to Frei where there is a landing slip. From there, the further road is unclear. It will either be the Argentinean boats picking me up. Although this is not probable, since the sea near the coast is frozen and it is impossible to navigate these days. The second option is to go either by Helicopter and land at the base of Carlini, or the Twin which has skies attached so it can land on the glacier, where i would then be picked up. And I can't wait to arrive :)
Eingestellt von Antarctic Uli um 11:59