Last days are for the preparations of the luggage of how things are left behind, or at least that is what you would think, if you knew that you would leave...
We had one more task pending: the measurement of the transect on the Fourcade Glacier on Barton Peninsula. These observations are important for the glaciological model run of the whole Potter Cove. It ties down the model results on the other end of the model area. So this is why we took off to take the last important measurements for this campaign. I went with two good friends, whom I already knew from former campaigns and who I knew could be trusted for the work on the glacier. It is a very important precondition for who to take on a glacier and who not!
We left on Sunday morning with the forecast (http://www.windguru.cz) predicting at least 6 hours of calm sea for the crossing from the Potter Peninsula across the cove to Barton Peninsula. We arrived without any incidents on the other side, prepared the ascend on the glacier border and went up the glacier. The transect was intact and all we needed to do was measuring the height of the ablation/accumulation stakes. 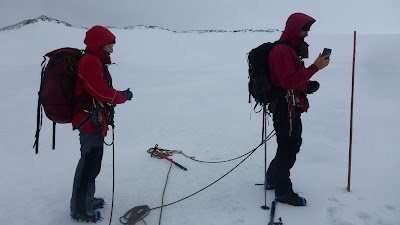 On the glacier top, we got into the clouds that always are accompanied by higher winds and precipitation in form of snow this time. Since it is not an environment that is very convenient, we just finished our task and went down again. We searched a bit of shelter at the glacier bottom and had a tea and some snacks to recover some energy. In these conditions, you always need to be aware that the cold and the harsh winds take a lot of energy and you need to drink some hot beverages and fill up some energy.
We called the station via radio to ask to be picked up, but when we arrived at the beach, we saw that the waves were easily 1m heigh and together with the snow and wind these weren't good conditions to land the boats on the shore. The quiet weather had changed into a full snow storm! We advised via radio that the boats turn back and that we would go to the refuge that was nearby. They told us, that they were already on the way and nearly there, and that they were going to try to land at the beach!
It turned out to be not a good idea: the motor got stuck in the rocks of the shore and broke, one of the divers went underneath the boat ba a wave carrying the boat full of load (us) over him. It was clear, that the divers had enough problems without us being in the middle and needing to be taken care of. We got out of the boat, got our stuff, and went to seek shelter in the refuge. This was a good decision, since the boat itself was in an emergency situation and needed help from the base!
We did the walk to the Korean refuge near Narebsky Point. It was a bit longer than anticipated, though, and being in the middle of a snow storm did not help, apparently. We walked about an hour through thousands of sea wolves, avoiding to be caught in their midst! These creatures can move at the amazingly speed of 30 kmh and they pass on some very nasty infections, when your leg gets caught between their fangs! Being that many in very close quarters raises their level of testosterone to high levels, so it very wise to watch out to all sides and stay together. Since we had the boat emergency suits on (our clothes and boots were completely soaked due to the rescue try), we appeared like three teletubbies on the beach going around the animals, trying to scare some off.. It was a walk that I will definitely not forget. We arrived at the Korean refuge after an hour and after scaring off some sea wolves lingering in front of the door, we finally got into the shelter!
What an amazing place in a hut of 3m x 3m, but we found a gas stove, tons of food, water, dry clothing and dry boots (which was most important)! Seriously, it felt like Christmas, Easter and your Birthday at the same time ;) 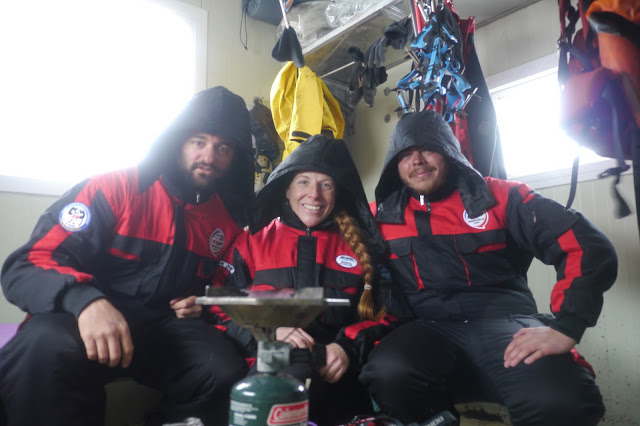 So we had warm and dry clothing, some hot and spicy soups (we left all of our rations there), Mate to drink, enough water, and sleeping bags for the night!
After getting warm and settling in, getting all things on a hanger to dry (for as much as it might help), our moods were already at good levels. At some point, we checked the outside. Of course, it was still in the middle of a huge storm, but after a hot meal and feeling dry and warm, your spirit is ready to do some more exploring.. 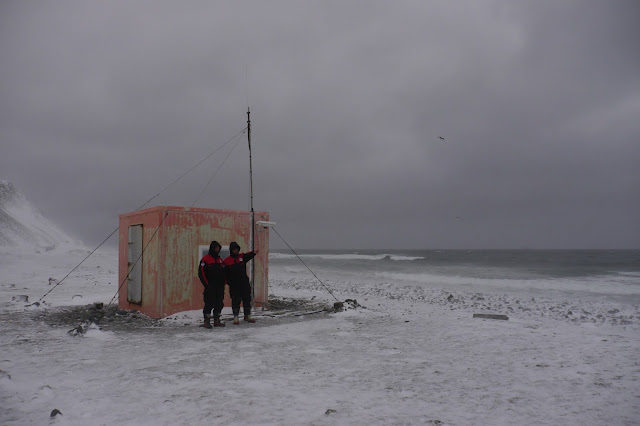 The Korean outfits were really good and sufficient enough to move a bit outside to experience the mind-blowing landscape outside! 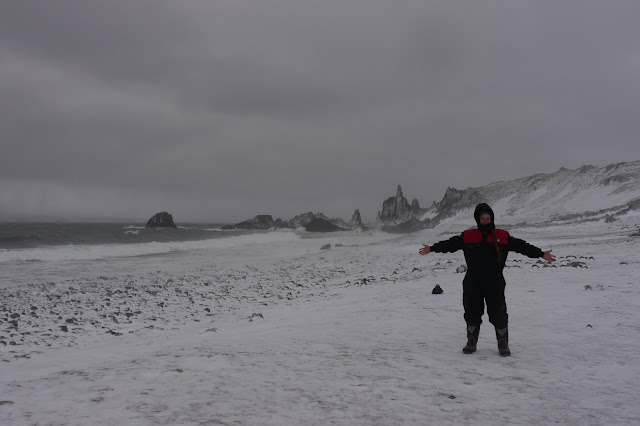 It is absolutely fascinating, how all colour can be sucked out of a landscape leaving nothing but black and white and drama! Winds with more than a 100 kmh were blowing us over, the beach was tinted in white and the animals were partly covered and trying to shelter from the high wind speeds! 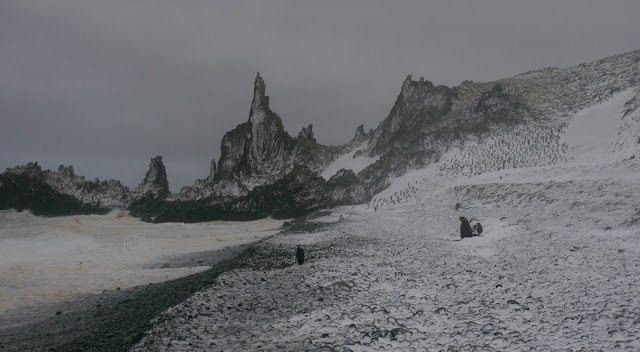 It is unbelievable that these should be real colours! Amazing, beautiful and absolutely devastating!!! 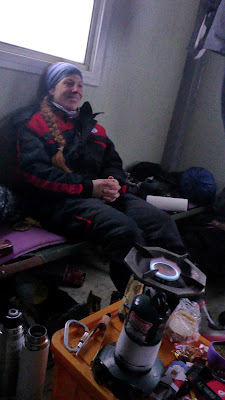 Back in the refuge, we settled back into our places. There is not very much to do, so you continue telling stories, drinking Mate, eating, telling jokes.
All the better to be with good friends sharing an intimate and special evening! And it turned out to be the last evening with them together. Some of the pictures are from Tincho (Martín Gingins) and Juanma (Juan Manuel Pereda). A night to share and never to forget!!!


The next morning, we got the message via the radio that I would be picked up in 15 minutes since the Herkules flight out of Antarctica would be THIS morning, and that otherwise I would miss the flight... 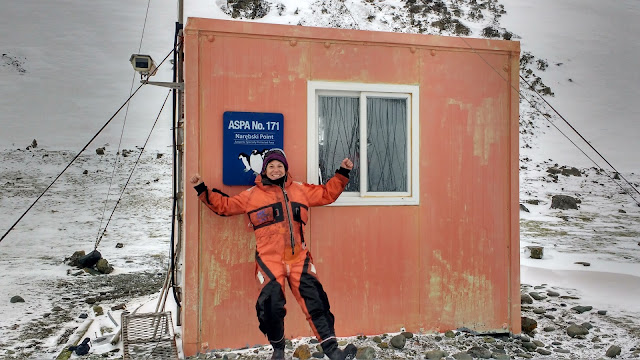 I really like spontaneity but in the Argentinean station, they never fail to surprise me all over again! We got our things together real fast, took some last pictures! and then it was already time to say good-bye to my friends, to this amazing and beautiful place, to my field work and turn your head 180 degrees!
As Monty Pythons Flying Circus states: And now to something completely different! 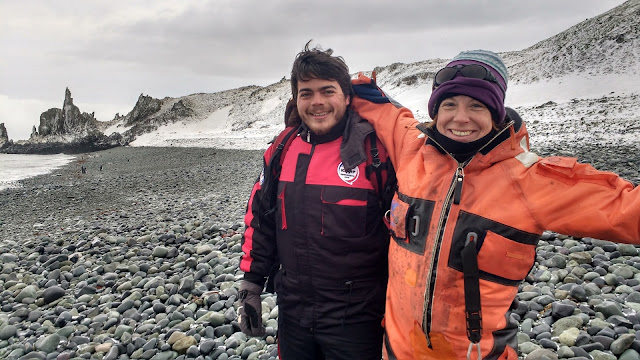 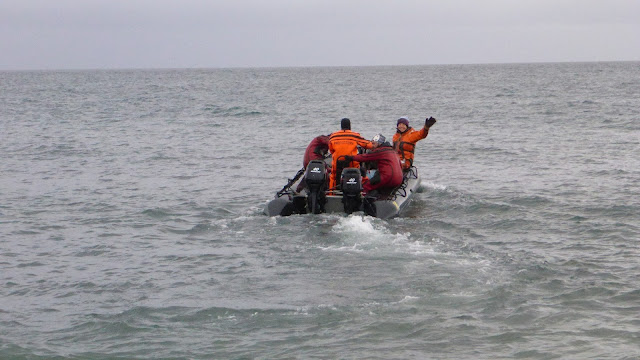 Many, many thanks here to Nadja and Marcella, who packed all my stuff expertly into my bags! In front of my inner eye I see how spread out it all was and how much, and I very much owe you for that! Good bye! We will meet again at some other place and time! Que tengan un buen invierno y nos vemos!!! Until our next meeting...